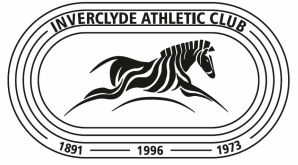 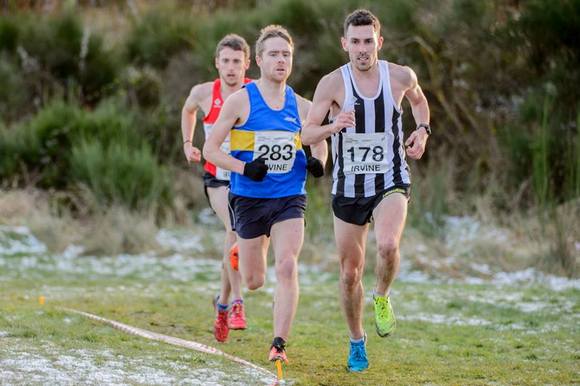 West District XC Champs, Irvine - Sat 9th Dec 2017
​British mountain runner Andy Douglas led a weakened Inverclyde men’s team to a team bronze medal, while agonisingly missing out on the race win on the line at Irvine Racecourse.
Andy who is the current British mountain running champion and defending West District champion, lost out in a sprint finish to GB triathlete, Grant Sheldon, as the duo finished on the same time making it one of the best finishes in recent years. Andy’s silver medal helped Inverclyde in the points race – one that they have struggled a lot in in recent years despite being among the top teams in Scotland. Having medalled in three races since 2000, the bronze was well-received to add to their silver from the year before.
Behind Andy, John Bell would sneak into the top ten with a strong finish in ninth. Further down the field were Pete Tucker in 31st, a little up the road from Sean Gaffney in 36th. David Tamburini would come in as fifth counter in 49th, while Jon Hammerman continued to show his worth to the team as the final counter, collecting his first West District medal after finishing 61st just ahead of Nicholas Gemmell in 66th. Elsewhere there were runs for Robert Todd (146), Robert Gray (159) and Damien Mallet (167) showing depth even with many runners absent.
But the men’s bronze wouldn’t be the only medal of the day. The under-17 women took the glory for the club by winning silver in the team race. Nuala McCheyne would return to finish in a strong 5th, nine seconds ahead of teammate Nyah Gillan who had a fantastic run in 6th. Nuala’s twin, Cliona, would make it three women in the top 10 after finishing ninth. Despite a difficult run, Zoe Renfrew finished in 17th, further showing the quality that the team has heading into next year, as they will eye a team medal at Nationals.
Speaking of rising talent, the Gray brothers posted solid results in the under-20 race, with older brother Ross taking individual bronze. Despite only recently recovering from an injury dating back to near the start of the year, Ryan was only 21 seconds behind his sibling, finishing an impressive sixth.
The youngest Gray, was Robert who finished in ninth place in the under-13s race, which should be good enough for selection for the West District team at Inter Counties Cross Country next month in Edinburgh. Keir Arthur was the other runner in the race, finishing in a respectable 52nd.
In the under-13 girls’ race, there were some West District debuts. A young team of Leah Collins (38), Orla McGeehan (50) and Hannah Thomson (59) saw a completed team as they finished tenth overall – a result they will hope to improve on later in the season. Orla’s older sister Hannah would feature in the under-15’s race finishing 62nd, behind teammate Abi Hammerman who finished 41st.
Looking to join Robert Gray in the inter districts team will be Sean Fischer-Keogh after finishing 11th in the under-15 boys’ race, as he sits on the cusp of selection for the West of Scotland team. First year under-15 Lewis Hainey finished in a decent 31st. The under 17 men had a couple of absentees, but Dylan Crawford’s 22nd place and Ben Nichol’s 29th will be encouraging signs ahead of the rest of the season.
On the topic of encouraging signs, the senior women will look fondly at their result, despite having an incomplete team. Nynke Mulholland continued her form with an 8th place finish, while Rachael Bushfield would finish 11th – both will be looking to make the West District team. A little down the road was Julie Gordon who continues to show signs of progression as she finished 19th and fourth veteran overall.
In a race where Inverclyde have oddly struggled in recent years, the medals poured in today and continue to forecast good omens ahead of the rest of the cross country season next year. 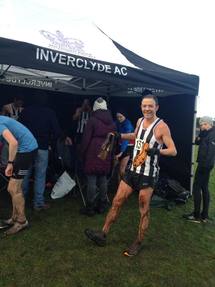 Renfrewshire XC Champs, Sat 25th November - Gourock
The medals were aplenty at the Renfrewshire Cross Country Championships as Inverclyde AC made the short trip to the Darroch Park for one of the most popular races of the year.
In the first race of the day, the under 11 boys won bronze, just two points behind second place Kilbarchan. Leading the team was Oliver Wagstaff who finished fifth after a strong finish. Not far behind in a packed field was his two counting teammates Fraser McLaughlin (11) and Aaron Harkins (12). Despite not counting for the team, there were some great runs by Philip McGeehan (14), Ashton Fulton (15), Liam Kane (21) and Euan Watters (27).
In the equivalent girls’ race, there was a team silver medal. Betty Fischer-Keogh, like Oliver in the boys’ race, finished fifth place, just ahead of her teammate Leona Conway who comfortably took sixth. The final counter for the team was Mirren Morrison who took 14th.
The under 13 boys continued the medal success with a team gold. Not only that, but all three counters for the team finished in the top four. Robert Gray would win the race by 22 seconds and Harris Morrison would win bronze ahead of final counter Tayven Adamson. Nathan Harkins would also start one of his first races for the club, finishing in tenth.
The girls would see another silver come their way in the under 13s race. Leah Collins led the contingent in sixth. A minute later, Orla McGeehan (9) would finish closely ahead of her teammate Erin Law (10).
The under 15 boys would replicate the success of the under 13s with a carbon copy performance by their three leading athletes. Josh Law would lead the field to take individual bronze, with Sean Fischer-Keogh taking a bronze, narrowly ahead of first-year under 15, Lewis Hainey. The 1,2,4 finish would ensure another gold medal. Elsewhere, Caleb Dunning (11) and Ross Davidson (12) would show that the team has a lot of depth heading into the West Districts, where the team will be looking for another team medal.
The girls would take a well-deserved bronze in their race, but it wouldn’t be the only bronze for Inverclyde in the race. Abi Hammerman         took third place by close to a minute. Hannah McGeehan (9) and Leah Cameron (11) wrapped up the needed points to take bronze on a tough course.
The under 17 men saw no complete teams, but that didn’t stop the medals coming home. Adam Hay would take the gold just five seconds ahead of fellow Zebra, Dylan Crawford. The only two Inverclyde athletes in the race would take the gold and silver comfortably ahead of third.
The under 17 women saw medals in both team and individual, being the only complete team in the race. Cliona McCheyne would continue her recovery from injury with a gold medal, ahead of Zoe Renfrew who finished second. Nyah Gillan would battle through the mud to take fourth place and wrap up the team gold.
Many of the seniors have been running at these races since they were under 11s and two of the most dominant in these championships have been brothers Ross and Ryan Gray. Ross continued his fine form this season by winning the race ahead of younger brother Ryan, who looks to have returned to action in fine form after a six-month-long injury. John Bell would make sure the podium was all black and white, but his third place would come with some controversy. After falling on the final lap, he would be sent the wrong way and instead of finishing, would be pipped by Ryan. Whether he was second or third, John’s podium was all that mattered.
Then came the final three counters, with six needing to count for the team prize. Sean Gaffney (9) will be disappointed to not have been further up the field, but along with respectable performances by Andy Harkins (13) and Callum Hunter (15), the gold medal was firmly in the hands of a senior men’s team that continues to perform every race. David Henderson (17) will be happy to be getting back into shape ahead of the West Districts, while Nicholas Gemmell (20) showed again how well he can run, finishing third in the veteran 40 category. Jon Hammerman (22) would be not far behind, while Jason Kane would finish just inside the top 30. Ross, Ryan and Robert’s dad, Robert Gray Snr, would finish 49th ahead of Damien Mallet in 56th.
Perhaps the best performance of the day however, goes to Pete Tucker whose spike ripped in two during the race, making it difficult for him to run. After pulling out with a lap to go after concluding that he was going nowhere, he had a tea break and a sit down, before deciding to finish his final lap. Despite his leisurely break, he still finished 35th. Pulling out of a race, before deciding to finish it with a broken shoe shows the determination of cross country runners and how much it means to them, even if they finish a long way down.
A day that saw multiple wins individually and in the team category for Inverclyde as well as many podiums, Inverclyde look on track to pull off some great  performances ahead of the West District Cross Country Championships in just over a week’s time. 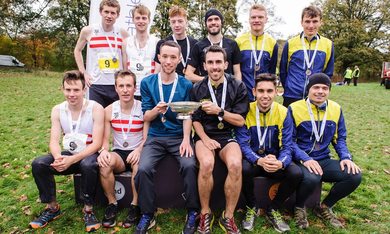